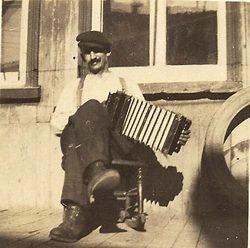 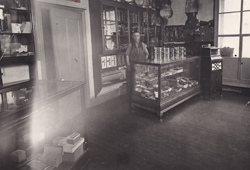 It was in 1888 in the Saint-Sauveur borough of Québec that Odilon Gagné began his career as an accordion repairer. In 1901, he became the true pioneer of diatonic accordions in Quebec by crafting the first Quebecker accordion.

The son of labourers, Odilon Gagné had the combined skills of a capable woodworker and an accomplished musician. These skills eventually led him into opening a woodworking workshop in the 1870s, wherein he began crafting furniture and pianos that he sold alongside harmoniums. Among his creations were 18 pianos. His father and himself having both been accordion players, Odilon Gagné began manufacturing the instrument in 1895.

Starting from scratch, he had to craft his own tools, such as the molds used in creating the reed ranks and the chromed keys, as well as getting accustomed to various materials like cardboard, cloth, and leather, the main components of an accordion’s bellows. He crafted his first accordion during his opening year. This was the first of a long series.

At the time of his death in 1916, he had hand-crafted 150 accordions. Obviously, the accordions of the Gagné brand filled the shelves of his shop. However, toward the end of the 1900s, “Pine Tree” Ludwig and Hohner accordions had become a common display in the front window.

Before his passing, Odilon Gagné had time enough to initiate two of his sons, Philias and Wilfrid, in the crafting of musical instruments. Like their father before them, both were accordion players. They took over Odilon’s business and christened the family enterprise La Maison Gagné et Frères in 1917. They continued to craft their father’s accordion design, with a ten-buttons row, two sets of reeds, and two bass buttons. Their accordions were crafted in pine and cherrywood, lead and steel, lamb and goat leather, as well as double-layered cardboard and paste paper for the bellows.

Keeping up-to-date on the latest innovations in musical instruments, they would always keep their displays well stocked. Thus, from the 1920s onward, they began furnishing their displays with harmoniums, guitars, saxophones, trumpets, clarinets, mandolins, violins, harmonicas and piano accordions. Accordion players like Théodore Duguay, Joseph Guillemette, Louis Fontaine, Gérard Lajoie, Lévis Beaulieu, to name a few of the more renowned ones, used Gagné accordions between the years 1920 and 1950.

Wilfrid et Philias Gagné died as bachelors; the former in 1950, and the latter in 1957. However, they kept the enterprise in mind when they took in as an apprentice one of their nephews, Paul-André Gagné, born in 1925, whom they had raised as a son.

Paul-André had learned to play the accordion at the age of five on a Ludwig model. He followed in Wilfrid’s steps and slightly expanded the store. He found himself the sole manager of the business after the passing of Philias. He perpetuated the tradition and crafting of the ten-buttons, two-ranks, two-bass accordions until 1994, which saw him retire. In the meantime, Richard Gagné, one of his sons, had learned to craft and repair accordions. He officially took over the leadership of the family business in 1984, further expanding the store, opening a music school on its second floor, and suggesting the sale of new, popular instruments like the electric guitar, drum kit, synthesizer, and more. Even though the sale of those instruments has become the main activity at La Maison Gagné et Frères today, accordions of the Gagné brand remain available next to those from Hohner, and Saltarelle.

In 2006, Richard and Paul-André Jr. acquired a new location in front of the current store. They expanded it by moving their piano and recording department within the walls of the new building. A year later, it was the turn of the drums and percussions department to double in size by re-locating to the basement of the new building. The brother Richard and Paul-André Jr. Gagné continue to invest in the centennial building in order to meet the demands of their diverse clientele, and to stay on top of the newest musical trends. It houses three stories of instruments, as well as a lutherie and electronic instrument repair centre.

Musique Gagné comes to you! Amidst a market in constant evolution, the website musiquegagne.com becomes an online store in 2016. Offering a wide selection of products, both from local and international markets, musiquegagne.com aims at being your reference in musical instruments. Treat yourself to a visit to our online store for an exceptional customer experience in the comfort of your home.