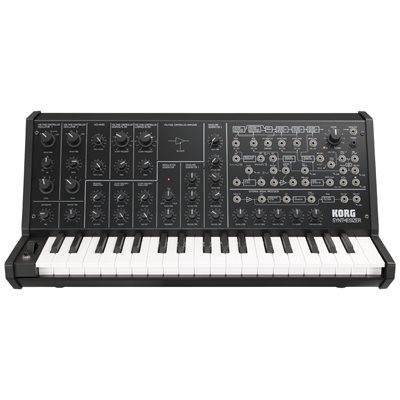 The original analog circuitry
The MS-20 mini painstakingly replicates the original MS-20. A development team led by the original engineers themselves worked to recreate the original circuitry, and when it was necessary to substitute a part, these engineers made the decisions based on careful listening, in order to reproduce the original sound faithfully.

In fact, the sound of the MS-20 mini has a somewhat bright and extreme quality to it because its sound is that of an original MS-20 in mint condition at the time it went on sale, before any of the components aged.

2VCO / 2VCF / 2VCA / 2EG / 1LFO structure
The MS-20 mini reproduces the distinctive synthesis of the MS-20; two oscillators with ring modulation, and envelope generators with hold and delay. The VCA maintains the basic design of the original, but it’s been modified to produce less noise than the original.

Self-oscillating high-pass/low-pass filters with distinctive distortion
One of the greatest characteristics of the MS-20 was its powerful filters, which provided resonance on both the high-pass and the low-pass. Maximizing the resonance would cause the filter to self-oscillate like an oscillator, producing a distinctive and dramatic tonal change that was acclaimed as inimitable, and was later used on the monotron and monotribe.
The filter circuit was changed mid-way through the production lifecycle of the MS-20; the MS-20 mini uses the earlier filter, which was felt to be superior due to its more radical sound.

External signal processor (ESP) for processing an external signal
The ESP carries on the experimental spirit of MS-20; it allows you to use the pitch or volume of an external audio source to control the synthesizer. For example you can input an electric guitar and use the MS-20 mini as a guitar synthesizer, or input a mic and use it as a vocal synthesizer.

Extremely flexible patching system
The patching system provided to the right of the panel lets you create complex sounds by plugging-in cables to change the connections between the various units. The possibilities are limited only by the user's imagination; different combinations of the modulation input/output and trigger, sample and hold, and noise generator can produce an incredible variety of sounds. By patching according to the MS-20 flow chart that’s printed on the panel, even the beginner can start taking advantage of these possibilities right away.

86% of the original size
MS-20’s design concept started by borrowing from the vertical layout found on larger and more expensive modular synths of its time, and then creating a more portable, inexpensive, and easier to use version.

To make it even more approachable, the MS-20 mini has been shrunk to 86% of the size of the original MS-20. In spite of its smaller size, meticulous care has been taken to accurately reproduce the knob design and the printing. The patch cables have been changed from 1/4" phone plugs to mini-plugs, and the newly-designed keyboard is also 86% of the original size.

Replicates every detail of the original
Our effort to remain faithful to the original is not limited to the unit itself. Even the package that contains the unit replicates the original as far as possible.

Also included are the original MS-20 owner's manual and settings chart, explaining how to create sounds. Now you can experience the excitement of the MS20, just like it was during its original release in 1978.

MIDI IN connector and USB connector
The MS-20 mini provides a MIDI IN jack for receiving note messages, and a USB-MIDI connector that can transmit and receive note messages. You can even connect the MS20 mini to your computer and play it from a sequencer.