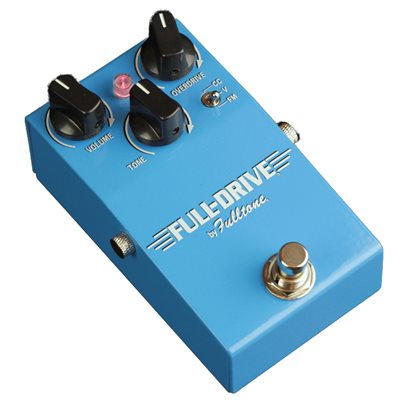 Yes it's true, finally the sound of a late 90s to early 2000s Fulldrive with-OUT the boost channel! Simple as it comes... with Volume, Tone, Drive, and toggle bringing back the Flat-Mids (FM), Vintage, and the infamous (for assaulting the front end of tube amps) Comp-Cut (CC) modes. Also has the incredible internally switchable "Enhanced Bypass" or "True-Bypass" a Fulltone exclusive (yah roll your eyes... until you try a FD1 or OCD V2 when it's turned off in EB mode!)

Soundwise? I'm talking about the exact (full midrange) Comp-Cut that was in the earliest FD2s, not the Flatter mids CC in later models. So even though the FD-1 will have the Flat-Mids mode, the Comp-Cut is the fuller-mids version identical to the "pre FM / pre-MOSFET" versions of the FD2. This tiny pedal is the size of our Mas-Malo, with top-mounted (also called rear mounted) jacks & power port, and a JRC4558 chip for your go-to overdrive sound. Come home.