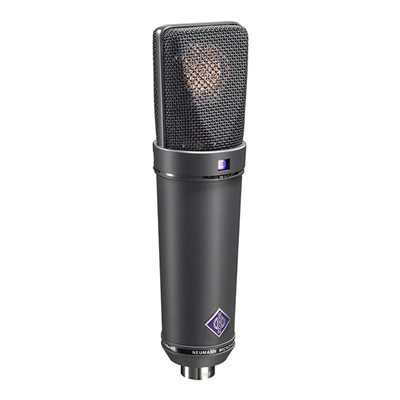 MICROPHONE NEUMANN U 89 I MT

The Pursuit of Perfection
The U 89 i is a universal studio microphone combining classic transformer coupled circuit topology with a state of the art Neumann capsule. Its linear yet smooth response has made it a prime choice for voice over and speech, but thanks to five selectable polar patterns, low noise and distortion, it covers almost any recoding situation in any genre.

A Modern Classic
The U 89 i combines advanced capsule technology with classic transformer coupled electronics. The result is a very versatile large diaphragm condenser microphone for all studio applications. Its features include five selectable polar patterns and a two-stage low cut as well as a switchable 6 dB preattenuation for extreme sound pressure levels of up to 140 dB without unwanted distortion.

Building the Perfect Beast
The U 89 i is similar in appearance to the legendary Neumann U 87 but smaller in size and lighter weight. This is no coincidence: Introduced in 1980, the U 89 i was conceived with the goal to improve upon the classic Neumann U 87. While the latter has remained the world's most beloved large diaphragm condenser microphone, the U 89 i is indeed technically superior in many respects. Not only can the U 89 i handle much higher sound pressure levels, it also has a more flexible low cut filter (lin, 80Hz, 160 Hz) to suppress rumble and compensate for the proximity effect. And in addition to the three main polar patterns, omni, cardioid, and figure-8, the U 89 i offers two intermediate positions, wide cardioid and hypercardioid.

Its K89 dual diaphragm condenser capsule is an advanced design with an extended, very smooth frequency response in all polar patterns. Its diffuse-field response is very even, too, which is crucial for natural sounding recordings in reverberant environments. In other words, the U 89 i's sound balance remains intact as you switch between polar patterns, and any off-axis sound, including spill from other instruments, is picked up uncolored. This is quite extraordinary for a large diaphragm microphone.

Applications
The U 89 i offers the best of both worlds: It combines the sonic precision and linearity of a state-of-the-art small diaphragm condenser microphone with the smoothness and flexibility of a large diaphragm microphone. This makes the U 89 i a truly universal studio microphone. The U 89 i is an excellent vocal microphone, especially for trained professionals who prefer to have their voice captured in its natural beauty. For the same reasons, the U 89 i is a sought-after microphone for voice over and film dubbing. U 89 i's unique combination of flexibility and superior off-axis behavior makes it an excellent choice for orchestral recordings, where it can be used as a main microphone or as a spot microphone for soloists and individual sections.