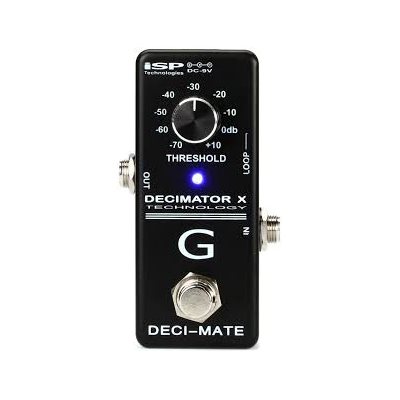 ISP Technologies introduces the new DECI-MATE G™ Micro Decimator pedal. The DECI-MATE G pedal is a full implementation of the world renowned Decimator G circuit with new patent pending tracking improvements all in a small, micro pedal package. When real estate is critical the DECI-MATE G is the answer. Now you can have the best noise reduction available in a micro pedal package with the full functionality of the larger G version of the Decimator pedal. The DECI-MATE G has a loop to insert your noisy pedals or connect to the effects loop of a guitar amplifier that has a series loop. The G version of the Decimator allows the noise reduction to directly track the guitar output. The advantage of tracking the direct guitar is the noise floor of the direct guitar output remains constant when you switch pedals or preamplifiers with different gain settings. This allows the DECI-MATE G to eliminate the noise in your rig without any need to adjustment it’s threshold setting for different gains and the corresponding noise floor changes. You can switch between extreme high gain and clean and never need to adjust the threshold. The ISP Technologies engineering team has spent years perfecting the operation of real time noise reduction and has been awarded multiple patents for the Decimator Technology. Patents include the technology for the adaptive response of the Decimator, which tracks the envelope of both super fast staccato notes as well as long sustained notes.

Other noise gates have a release knob compromise to adjust the release response in an attempt to best match the release to your playing style. With a typical gate, if you set a fast release to remove noise, the instant you stop playing the long sustained notes will either get an undesirable cutoff or will chop off the signal with a very ugly modulated release as the signal decays. The DECI-MATE G provides a fully adaptive release response, which tracks the envelope of the signal and instantly changes the release from super fast to a long, smooth release for sustained notes. The new Decimator X™ technology is based on our new patent pending “Time Vector Integration” which eliminates any modulation of the sustained note. This allows long sustained notes to providing amazingly smooth and transparent release response. Also, the DECI-MATE G won’t alter your tone. The DECI-MATE G is a full analog design without any digital artifacts or aliasing for the most transparent noise reduction available.

In order to fit the additional loop connections and keep the small package size the loop connections are done via a 3.5MM RTS jack and the breakout patch cable is included. With the DECI-MATE G, connect all your high gain pedals in the loop for totally noise free operation regardless of how much noise your gain pedals create, and then switch to totally clean without having to adjust the threshold. The DECI-MATE G can also connect to a series loop of a typical guitar amplifier and eliminate both the noise from pedals in front of the amp and any preamplifier gain noise from the guitar amplifier. The new patent pending Time Vector Integration provides the absolute best release tracking, for incredibly smooth long sustained note release, and will instantly adapt for super fast release with quick staccato notes. Don’t settle for a compromise in performance when you can have the best, most transparent real time noise reduction available.