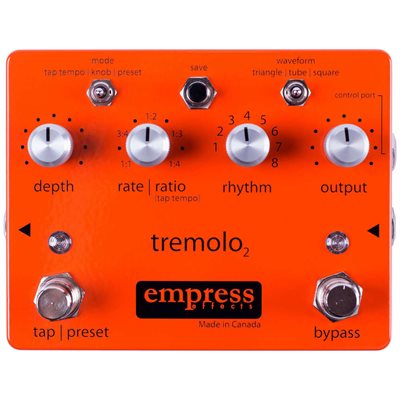 Overview
The Empress Tremolo2 is an original design built from the ground up to include innovative features without sacrificing tone. The audio signal path is analog, but the tremolo effect is controlled digitally via opto technology.

Tap tempo, selectable waveforms, a choice of 8 rhythms and a full preset system capable of storing up to 8 presets are all at your fingertips. The control port allows control over the Tremolo2 via external tap tempo, expression pedal, contro l voltage and MIDI, making the tremolo2 more powerful than ever!

Features
-Pristine Sound - The Empress Tap Tremolo2 Pedal has to be heard to be believed. It's whisper quiet and free from the "LFO throb" usually associated with tremolos. We dare anyone to find a better sounding tremolo.

-Waveform Selection - You can modulate your sound with three different waveforms. An asymmetrical tremolo was modeled after a '65 Fender Vibrolux (brown face) to give you the fullest tremolo sound possible. A square wave can be utilized if you're after a harder sound. And if you're looking for a more normal tremolo, you can use the triangle wave setting.

-Tap Tempo - The Empress Tap Tremolo2 Pedal averages your last four taps so it plays in sync with your music. You can also choose different tap to tremolo rate ratios. 1:1, 3:4, 1:2, 1:3 and 1:4 are available.

-Rhythms - Another exclusive feature. The Empress Trem will definitely do your run-of-the-mill tremolo sound to a tee. But you can also set it to play different rhythms. Check out the soundclips for examples.

-Gain - A problem with most tremolos on the market is that when they're engaged, you hear a noticeable drop in volume. The Empress Trem solves this by having a gain stage on the output. It's able to deliver up to 12dB of gain without adding any distortion to the signal.

-Presets - Save all your settings in up to 8 presets and recall with the touch of a button.

-True Bypass - The Empress Trem employs true bypass, so you can be sure that it's not affecting the signal when disengaged. Buffered bypass is also available if that's your thing.

-Advanced Configuration Menu - The Advanced configuration menu lets you configure how your tremolo works. Select from true or buffered bypass, 0-8 presets, MIDI configuration, Control port control (expression pedal, external tap, control voltage and MIDI) as well as which preset system to use, the ramp speed when switching between presets and more!

-Perfect Size - The enclosure measures approximately 4.5" by 3.5" by 1.5", which is delightfully small when considering all the features packed into this unit.