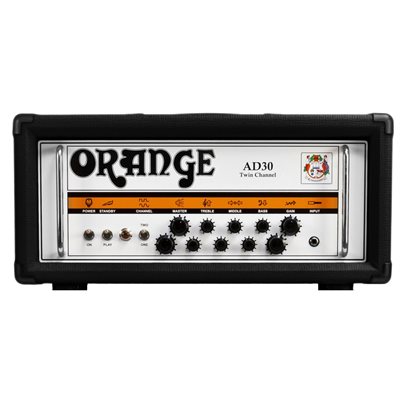 A 30 WATT CLASS A AMPLIFIER

The AD30 is two vintage amps in one, made in England with classic Orange styling. The channels have two separate signal paths but are voiced differently. Channel One is the cleaner channel, with channel Two being the classic crank-it and go channel. With two stages of gain, the amplifier gives players power amp distortion, for that classic vintage tone.

The valve rectifier is key to the amps sound, giving controlled natural compression in the power supply, making it perfect for country pickers through to indie artists.

Custom British made hand-wired transformers made to Orange’s own specification, keep this amp Orange to the core.

The AD30 is a classic, two channel British amplifier, you can set both channels to clean or both to crunch. It’s a versatile amplifier that has two completely separate signal paths, Channel One has a thick, creamy, classic voice. Whereas Channel Two has a tighter bass response, with more gain and a quicker attack.

The GZ34 valve rectifier is key part of the AD30’s sound, giving natural compression in the power stage of the amplifier. Giving the amp a unique response and sag, reacting to how you dig into strings and play.

Redesigned for the AD30, the U.K. built, five section 30 Watt transformers, that saturates earlier and smoothly like vintage transformers. Over two years of development and several designs revisions these transformers have become the standard Orange transformer.