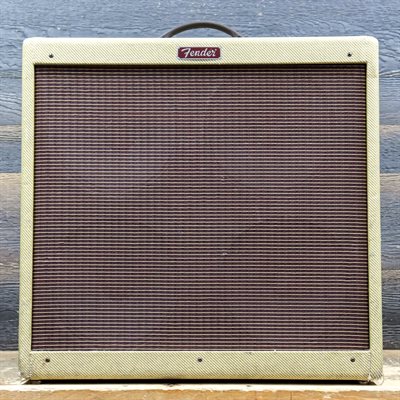 Press and move to zoom.
Mouse over image to zoom.
Click to enlarge

Up for sale a Fender Blues DeVille Reissue 60W 4x10"Tweed Guitar Combo Amplifier w/Footswitch - #B-257432!  This beautiful amplifier is a Used Model in Good Cosmetic Condition and in Perfect Working Condition.  On this one, there is oxidation and plating deterioration on the control panel (see 18th to 20th pictures) and there are some scratches, marks, dents, notches, small tolex rips and few other signs of wear here and there (see 13th to 24th pictures), but nothing major.  Unit comes with its Fender Two-Button Footswitch.

In 1993, Fender released the “Tweed” series amps to great success and acclaim. The concept: what if a great old collectable 1950s Deluxe or Bassman was customized with channel switching and Reverb? The Blues Deluxe and Blues DeVille were launched as vintage-styled tube amps with “boutique” tone at mass-produced prices, and many pro players in the rock, country, and blues fields used them with great results.

After a few years, the Blues Deluxe and Blues DeVille were reborn as the Hot Rod Deluxe and Hot Rod DeVille, when they received modified circuitry, a third “More Drive” channel, and Black/Silver cosmetic treatment. Though the Hot Rod series amps are more popular than ever today, increasing numbers of enthusiasts continue to request the warm tone, unique circuitry, features and look of the original versions. These “Reissue” models will be offered in addition to the Hot Rods.

- 2 Button Footswitch for Drive Select and Reverb On and Off