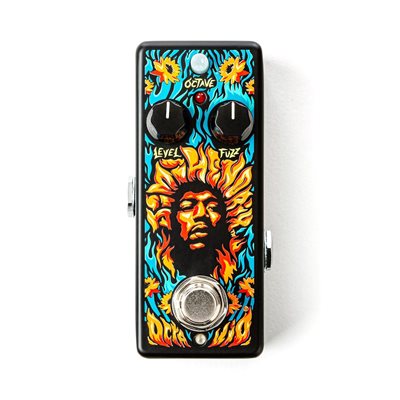 This classic effect has been updated with a switch to toggle between the iconic octave-up sound that Jimi Hendrix made famous and super snarling silicon saturation. It all comes in an MXR mini housing with modern features such as a status LED, true-bypass switching, and a 9-volt power jack. Emblazoned with the trippy, kaleidoscopic designs of award-winning UK-based design crüe ILOVEDUST.

This pedal can be powered by a Dunlop ECB003 9-volt adapter, or the DC Brick™, Iso-Brick™, and Mini Iso-Brick™ power supplies (not included).

The Jimi Hendrix ’69 Psych Series Octavio Fuzz updates the circuitry of the original cheese wedge Octavio Fuzz for modern players and pedalboards. In its default mode, this pedal snarls with super aggressive silicon saturation. Pushing the Octave switch kicks in the classic octave up fuzz sound so potently demonstrated on tracks such as “One Rainy Wish” and “Purple Haze.” Both modes deliver a range touch-sensitive fuzz tones that will inspire you to venture into uncharted sonic territory just as the incomparable Jimi Hendrix did when he used the Octavio Fuzz to make history. This modern rendering of a classic one-of-a-kind effect comes in an MXR mini housing dressed in the trippy, kaleidoscopic designs of award-winning UK-based design crüe ILOVEDUST.